To counteract the economic impacts of COVID-19 pandemic, the Group of Twenty (G20) already spent around $8 trillion in a series of economic stimulus and fiscal measures. However, future stimulus will still be necessary as the economic effects of the pandemic are projected to impact the world economy in the following years. Although the pandemic is an immediate crisis, it is now time for us to pay attention on long-term plans for the available investments and draw a strategy for an economic recovery that leads to a green economy transition. A long-term strategy must target extensive and pro-active restoration of ecosystems as pointed out by the United Nations General Assembly, which proclaimed the UN Decade on Ecosystem Restoration (2021-2030).

Due to their importance for the protection against sea level rising effects; storm and coastal erosion protection; refugia; and food production, vegetated coastal ecosystems – mangroves, tidal marshes and seagrasses – are target areas for ecosystem restoration plans. But those ecosystems are also notable carbon accumulators, recently named Blue Carbon (BC) primarily to portray the significant contribution of these ecosystems to global carbon sequestration and climate change mitigation. 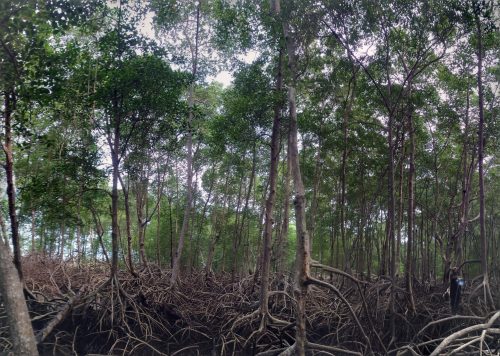 Despite the inherent variability across these ecosystems, mostly due to climatic, ecological and geographical disparities, mangroves stand out from other BC ecosystems as the one with highest carbon storage per area.

The BC stocks of vegetated coastal ecosystems are considered irrecoverable in the short term (until 2050), as after converting these areas to other activities, it can take – on average – between 64 years (marshes) to 153 years (mangroves) to recover the BC stock lost.

Mangroves are ecosystems composed of woody species, shrubs and other halophyte plants, which inhabit the intertidal zones along the coast of tropical and subtropical regions, between latitudes 30° N and 30° S.Mangroves also surpass C stocks from boreal, temperate, and tropical forests. These extremely dynamic ecosystems change their size according to the height of the tide, increasing or decreasing their size due to the erosion or accretion of sediments, which are controlled by the complex circulation of the tides, in addition to the topography and morphology of the estuary.

Other factors, such as local climate, salinity and vegetation type, also play an important role on controlling the formation of mangrove forest and the amount of BC stocked. Recent research data shows that a major part these BC stocks are due to net primary productivity from the mangrove forests, mostly by tree species, and are stocked in mangrove soils where C is stabilized by organo-mineral interactions.

A recent study conducted in over 190 mangroves from America, Asia, Africa, and Oceania continents, demonstrated that the subsurface carbon represented 85% of the total carbon stock in mangrove ecosystems.

Brazil has 7% of mangrove global area and they are found in nearly all the Brazilian coast, from the northern border with French Guiana, to the southern State of Santa Catarina. Brazilian mangroves have a greater C stock capacity than many in-land ecosystems. Previous research reported that tropical semiarid mangrove soils of Northeast Brazil have a C storage capacity up to six times higher than the average storage capacity of other vegetation units of the semiarid region.

Even comparing to other carbon-rich ecosystems, mangroves hold more organic carbon. For example, in the Amazon region, carbon stocks of mangroves soils were over twice those of upland evergreen forests. Despite its huge importance, mangroves are being lost at a higher rate than tropical forests and the major threats to mangrove areas in Brazil are landward expansion, deforestation, aquaculture, salt mining and subsistence agriculture. There is also an imminent threat of losing suitable habitats for mangroves forests if sea levels rises to fast.

In order to conserve, restore and manage these ecosystems, we need raise money to finance conservation efforts. A barrier to establish values for mangrove carbon storage is also due to its dynamic nature as it is challenging to reach trustable net balance ratings of greenhouse gas (GHG) emissions to support carbon neutrality initiatives, which allows companies to buy certified carbon credits and reduce their tax burdens.

Although the research agenda on these ecosystems is already dealing with these issues, there is still a long way to go. But we need to preserve and restore these ecosystems now in order to reach the climate change mitigation goals. One of the ways we can tackle the problem immediately is by adopting a carbon tax to protect tropical forests, including mangroves. Other countries, such as Costa Rica and Colombia already adopted this as a levy on fossil fuels and are successfully investing the revenue on conservation efforts. It is time for Brazil to do the same.

What does ‘zero carbon’ mean when you don’t have electricity?
29 October 2021